Geneva: Launch of an international campaign against anti-personnel mines and the Moroccan wall of shame in Western Sahara 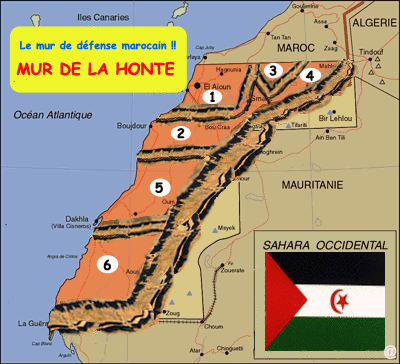 Geneva played host on Friday 18 March an international day of protest on the theme 30 years of Moroccan occupation in Western Sahara : that's enough! In the morning outside the UN where the annual session of the Commission on human rights is being held, delegations from France, Italy, Spain, Holland, Belgium, Algeria, Congo, and Switzerland denounced the illegal nature of the occupation of Western Sahara and made an appeal to the UN, the European Union and all countries to put pressure on Morocco which is systematically refusing any proposal from the international community to put an end to the conflict with the Polisario Front.

In the afternoon, at the World Organisation for Meteorology, a conference-debate was held in the course of which experts from the United States of America, Spain, Switzerland and Western Sahara denounced the 2700km long wall constructed by Morocco from 1980 to divide Western Sahara and to try to annexe the territory. They likewise denounced the millions of landmines which make Western Sahara a dangerous territory which kills and maims those who venture there and nomads who live there. Ruined lives, decimated families, lost stock, an ecological catastrophe and a prohibition of freedom of movement for people, such are the consequences of these mines and this wall.

Jean Lamore, an American expert resident in France, exposed the scandal of the silence which surrounds not only this wall of shame, but also the conflict in Western Sahara and the right of the Saharawi people to self-determination. The wall has the infamous record of being the longest in the world, 300 km longer than the Great Wall of China.

Carlos Ruiz Miguel, Spanish professor of constitutional law in La Coruña recalled that, just as the International Court of Justice had declared illegal, the wall erected in Palestine, the wall built by Morocco in the Sahara violates numerous points of international law.

Finally the Saharawi historian, Ubbi Bouchraya, researcher at the Sorbonne, described the structure of the wall and Boïbat Chej Abdelkhay, President of the Saharawi Anti-mine Campaign revealed the horrifying toll of victims caused by landmines, with which the Moroccan wall is studded. A short, and particularly powerful documentary showed the ravages of anti-personnel mines through portraits of severely handicapped Saharawis. After the debate and the intervention of the Italian delegation, a scuffle broke out around a woman of Swiss nationality and Moroccan origin, who tried to disrupt the conference, as the Moroccan services do at all demonstrations of this kind. The international conference concluded its work with approval for the program of activities of denunciation of the Moroccan wall in the Sahara and the landmines which sow desolation and death in Western Sahara.

Swiss Committee of Support for the Saharawi People