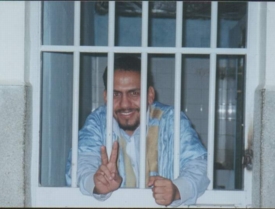 The testimony of Ali Salem Tamek

I am a Sahrawi former prisoner and a human rights and trade union activist. M full name is Ai Salem Tamek. My triple name is Ali Salem Mohamed Salem Elmami.I was subjected to political detention four times in 1992, 1996, 1997, 2002 and I was forcibly deported twice in 1992 and 2002. I was sacked of work in 2002 because of my refusal to obey the forcible deportation. I was deprived of my passport for more than 12 years as well as the denial of choosing the name of my daughter, Thawra, who is still deprived of registering her name since her birth on September 30, 2005.

On April 11, 2005, I went to Spain for a second time to continue my curing of the chronic illnesses I suffer from because of the arrest periods and the repetitive hunger strikes such as asthma, heart disease, rheumatism, intestines, the digestive organs and other skin illnesses. Simultaneously, I did some humanitarian activities in Switzerland, Belgium, Italy, Spain in order to unveil the dangerous situation of human rights in the occupied territories of Western Sahara . Being invited and supported by many human rights organizations which facilitated my meeting with some parliamentary, media, governmental and civil society organizations which sympathized with the Sahrawi people's suffering which they still undergo caused by the Moroccan state.

On Monday , August 18,2005, I decided to come back to El Ayun from Las Palmas on the flight number 212 that reached El Ayun airport at 17:00 GMT that I learnt was extremely controlled by the Moroccan police and secret services agents. I was sure that the Moroccan authorities will take a repressive measure against me. I got on the plane at 16:30 and I reached El Ayun airport in the Western Sahara less than an hour later.

As the plane landed, I saw about 12 Moroccan intelligence agents coming to the plane They stopped me refusing to show their identities. They took me to a civil car, blind folded me in order not to see some important intelligence officials supervising my abduction such as the Wali of Security in El Ayun, Brahim Bensami, the highest official responsible for Direction of Territorial Security, DST, in the southern region from Agadir, Morocco to Dakhla, Western Sahara.

Before my abduction, I was suffering from severe asthma, stomachache, and other skin illnesses. For about an hour, I heard only the word, "El Hajj", a nickname often used by the torturers in order not to reveal their names to the prisoners. They put me in the car surrounded by a group of security agents, and after half an hour, I found myself in the Judicial Police station in the occupied El Ayun. The police agents started at once to fetch my clothes and to take as many details on me as possible: my personal information, the intifada in Western Sahara, the Western Sahara issue and its autonomy, and how I and the other Sahrawi militants see it, apart from my trip to Europe and the organizations and the parts I met, as well as a huge file of the international media including some articles and interviews which I have never seen. Then I realized that they were looking for any mistake that they could exploit to charge me of the already prepared accusations, and to sentence me to the hardest verdict, particularly to be associated with the peaceful demonstrations in the Western Sahara, southern Morocco and in the university cities calling for the Sahrawis' right to self-determination and independence that started on May 21, 2005. That was exactly the period when I was in Europe, from April 11 to July 18, 2005.

On Wednesday, July 20, 2005 afternoon, I was taken to the appeal court in El Ayun in order to sign on the prolongation of my custody to the afternoon of Thursday, July 21, 2005. The interrogation continued in the same way, but this time with some attempt to bribe and threaten me of being put in prison if I refuse the offer. The interrogators never stopped asking me on my thoughts and political opinion, especially at the presence of the Wali of security, Brahim Bensami, and some other security officials that I never saw before.

The most astonishing is that the interrogators insisted a lot on the interview that my friend, the Moroccan journalist, Ali Lemrabet, took with me on May 29, 2005 on El Mundo newspaper that caused a lot of interest because of the Moroccan Makhzen through its Maghreb Arab Press, La Map, that accused me of calling for terrorism.

Although I argued with the interrogators and refused to sign the prearranged proceedings which were already prepared by the Judicial Police, I was taken to the court of appeal where I was interrogated by the General attorney in the presence of the defence lawyer, Mohamed Lehbib Rgaibi who volunteered to support me. I read the proceedings to which was added three pages, 03-04-05, which accuse me of being the one who is in charge of the supervising the intifada that took place in the cities of the Western Sahara, southern Morocco and the university cities. Although I strongly refused the accusations, I was taken to the examining magistrate who interrogated me on criminal acts that I have no relation to. Then I was put in a separate cell in the Black Jail, el Ayun , Western Sahara, prevented from contacting the other Sahrawi human rights activists in a prison where even the least decent conditions for treating prisoners are not available.

In conclusion, I would like to stress that this abduction crowns a repressive series that took different forms against me, such as the ferocious campaigns led by the Moroccan media, parties and associations that are makhzen-made under discriminatory slogans calling for my assassination. They even frightened and threatened my family and perpetrating the crime of raping my wife, Aichatou Ramdan Souilem, by the Moroccan security services, DST, while I was arrested in the central prison in Ait Melloul. She is still living its psychological badeffects up to now. They also tried to doubt on me and spoil my reputation in order to force me to give my strong conviction of the Sahrawi state.

The former prisoner of conscience,
The human rights and trade union activist,
he prisoner in the Black Jail in El Ayun, Western Sahara.
The winner of the prize of the municipality of Algiers the capital, 2004.
The winner of Doctor Antonio Gonzales Caraballo Prize 2005.

>> Tamek was illegally transfered to the prison of Ait Melloul, Agadir on August first 2005 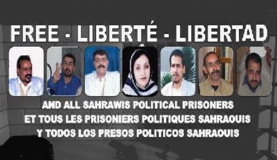