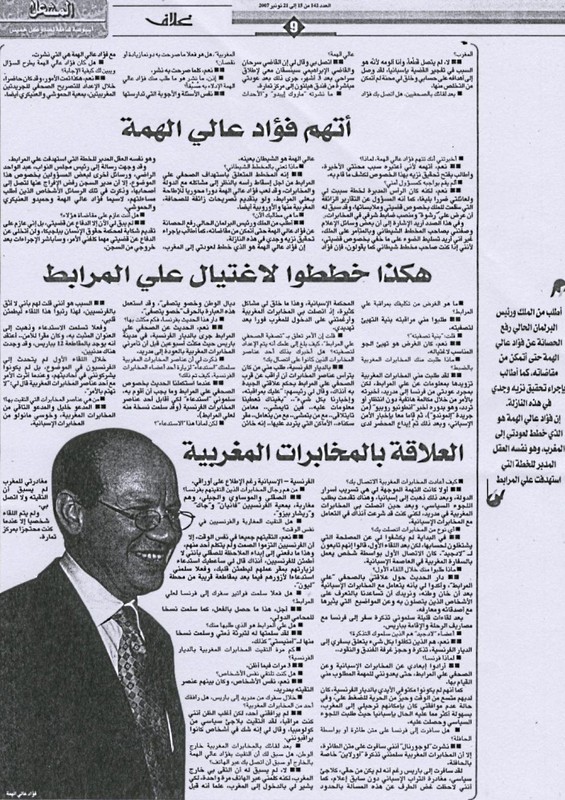 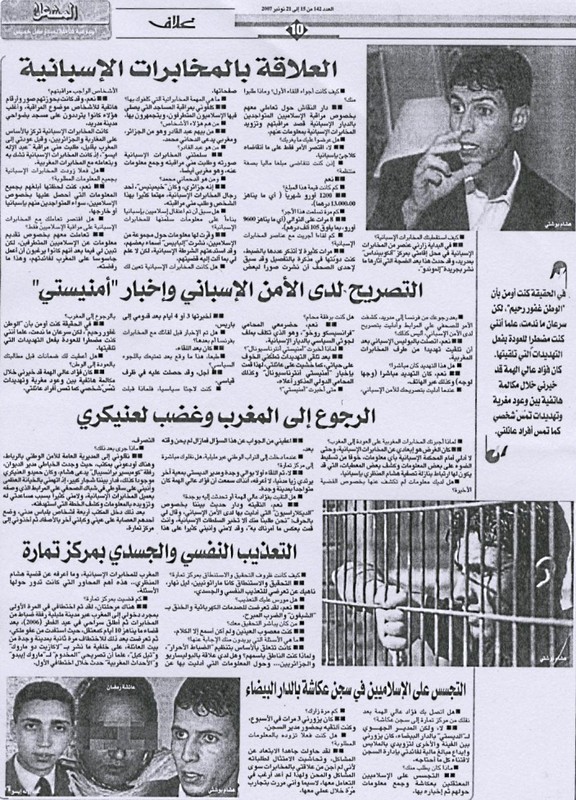 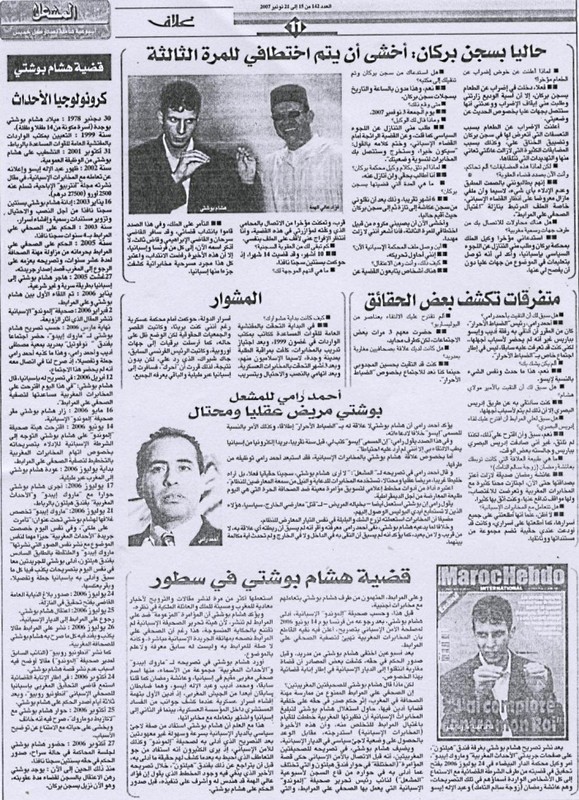 
Remember
About Hicham Bouchti ARSO wrote in the weekly news of August 2006:

Intrigues and manipulations
Various Moroccan, Spanish and French newspapers, have published an incredible story full of contradictions, intrigues and manipulations, touching Spanish-Moroccan and French-Moroccan relations, through the adventures of a former agent of the Moroccan services.
Hicham Bouchti, a Moroccan citizen, lodged an asylum claim in August 2005 in Spain. This individual had served in the Moroccan auxiliary forces (in charge of supervising the army) in 2000-2001 and in the "deuxième bureau" of the Royal Army Forces from 2001 to 2003, where he was in charge of infiltrating Islamic circles. He was sentenced to two years’ prison in January 2003 by a military tribunal for fraud or revelation of military secrets, according to sources. When he came out of prison, finding no work, he is believed to have decided to go to Spain. This is the version which he gave to two Moroccan weeklies, close to the powers, to whom he presented himself in July of this year on his return to Morocco. [Maroc-Hebdo International, No 708]
His request for asylum is refused, but Bouchti is not turned back. He apparently then met, at a refugee centre in Madrid, Aïcha Ramdane, the wife of Tamek who put him in touch with Ali Lmrabet, a Spanish Moroccan journalist with El Mundo. He published an interview with Bouchti on 3 February 2006, containing revelations, partly already known, on the king and the royal family. [El Mundo, 03.02.06]
Back in Morocco, Bouchti “reveals” in a jumble that according to him Aïcha and Lmrabet are agents working for Spain, that he was used by the Spanish secret service to become the spokesman of the movement of free Moroccan officers and was dragged into a Franco-Spanish conspiracy to eliminate Lmrabet and Basri. Just that! [MHI, No 709]
For Lmrabet and the daily El Mundo, [see chap. 9 of Sahara-Info du 27.07.06] , Bouchti is a Moroccan agent used both by the Spanish and the French services to eliminate him. He has support from the highest level in Morocco. The names of Spanish, French and Moroccan agents are cited by the newspaper.
The court of Casablanca has not bothered Bouchti, but decided instead on an inquiry into the Spanish services and El Mundo for trying to destabilise Morocco... [MAP engl]
For the journalist Pedro Canales [La Razon, in Sahara-Info, 31.07.06, chap. 6] the manipulation is the work of a sector of the Moroccan regime favourable to the interests of France, which wants to torpedo the influence of Spain in Morocco. For Jeune Afrique, on the contrary, the French weekly known for its position close to the Makhzen, the whole affair is due to a manipulation of the pro-Polisario Spanish press... [J.A. 30.07.06]